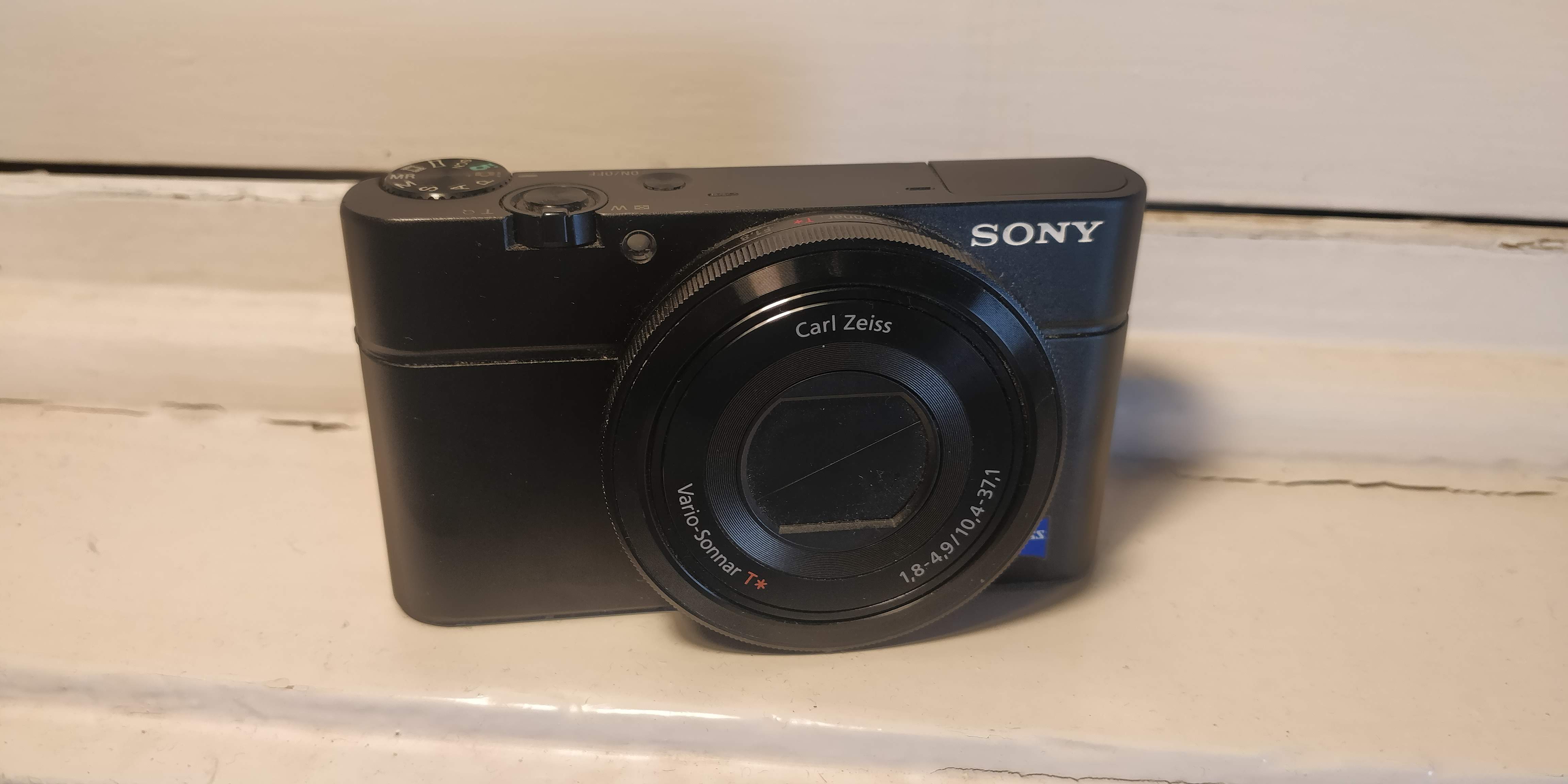 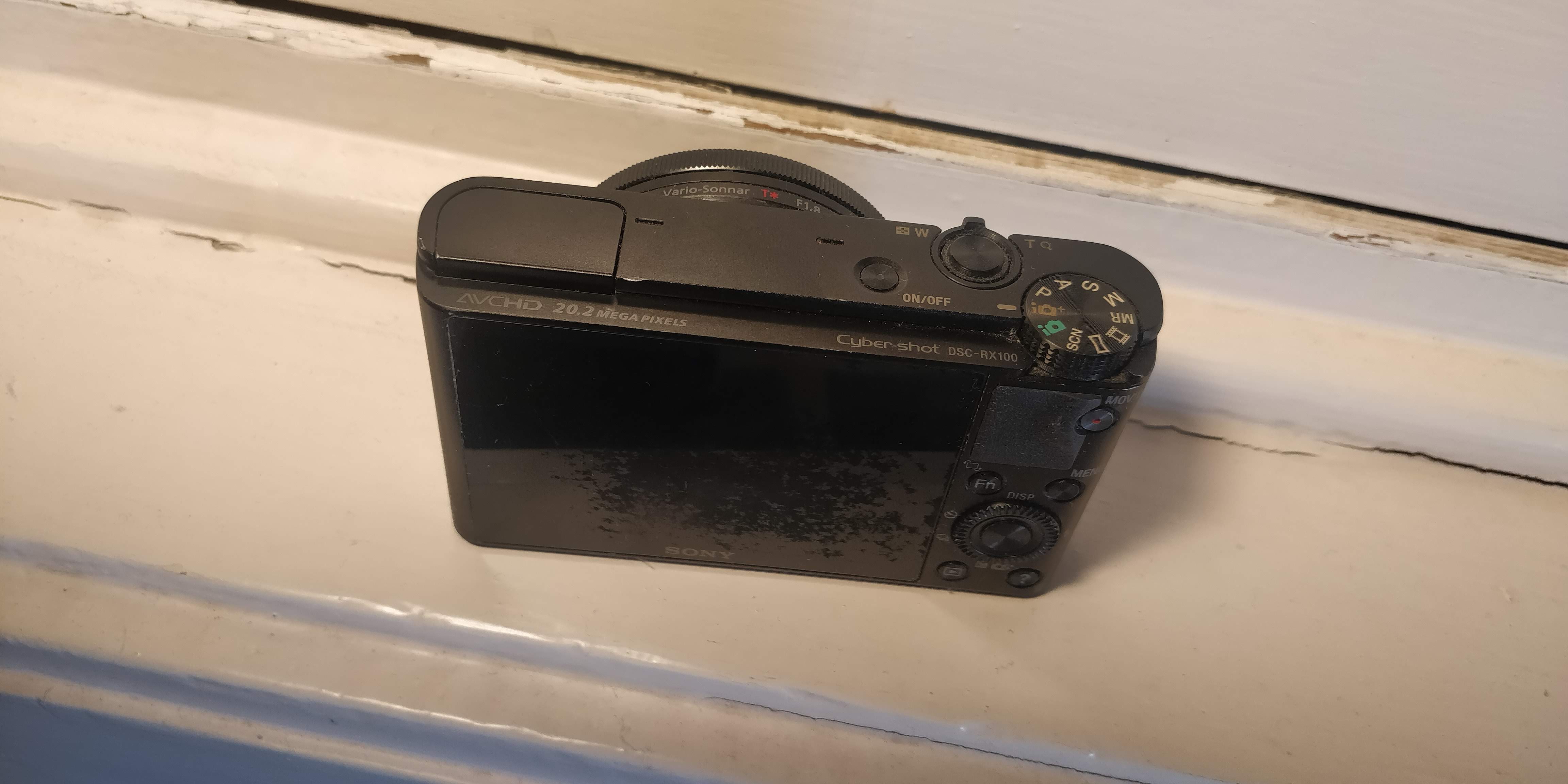 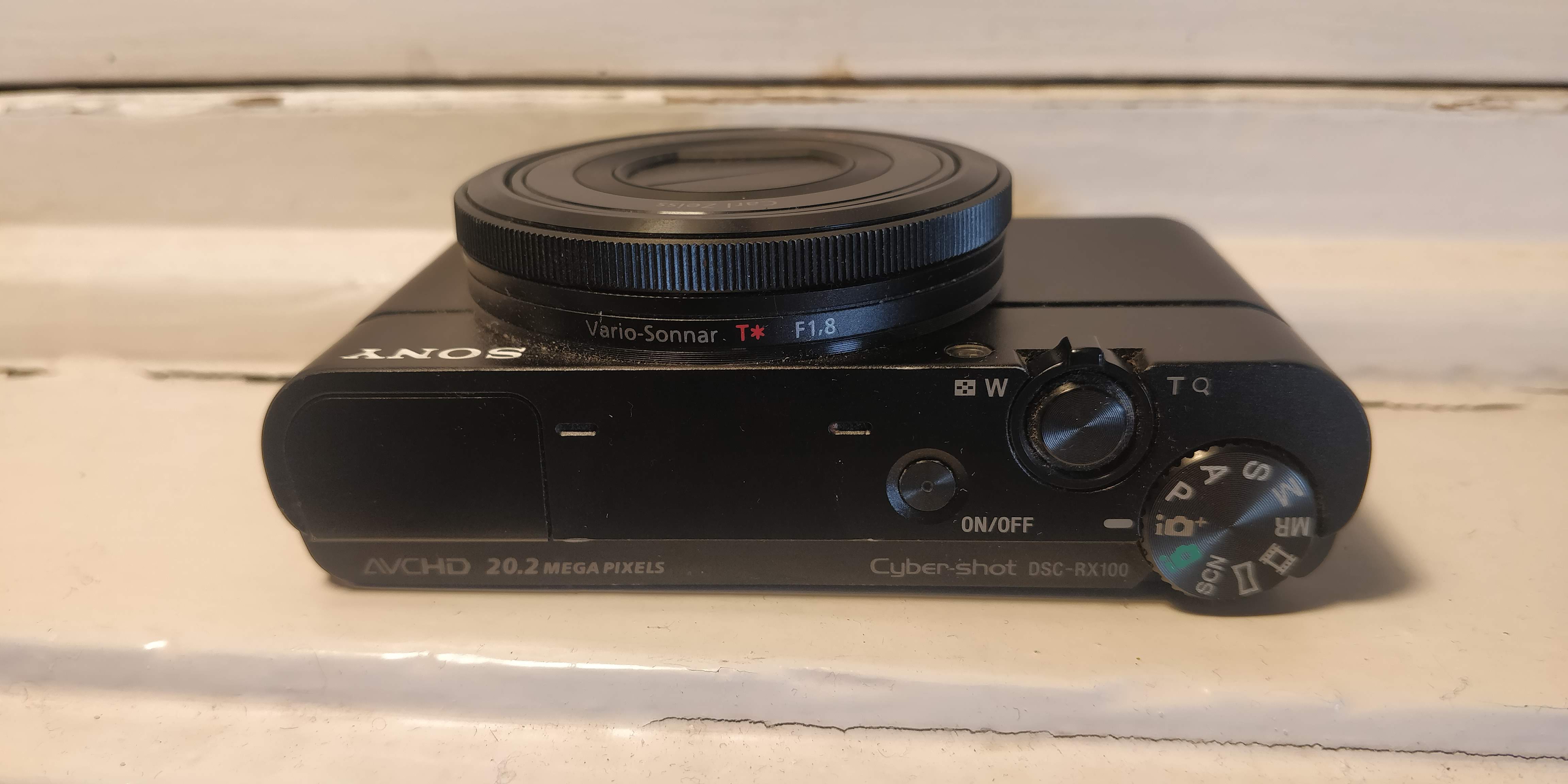 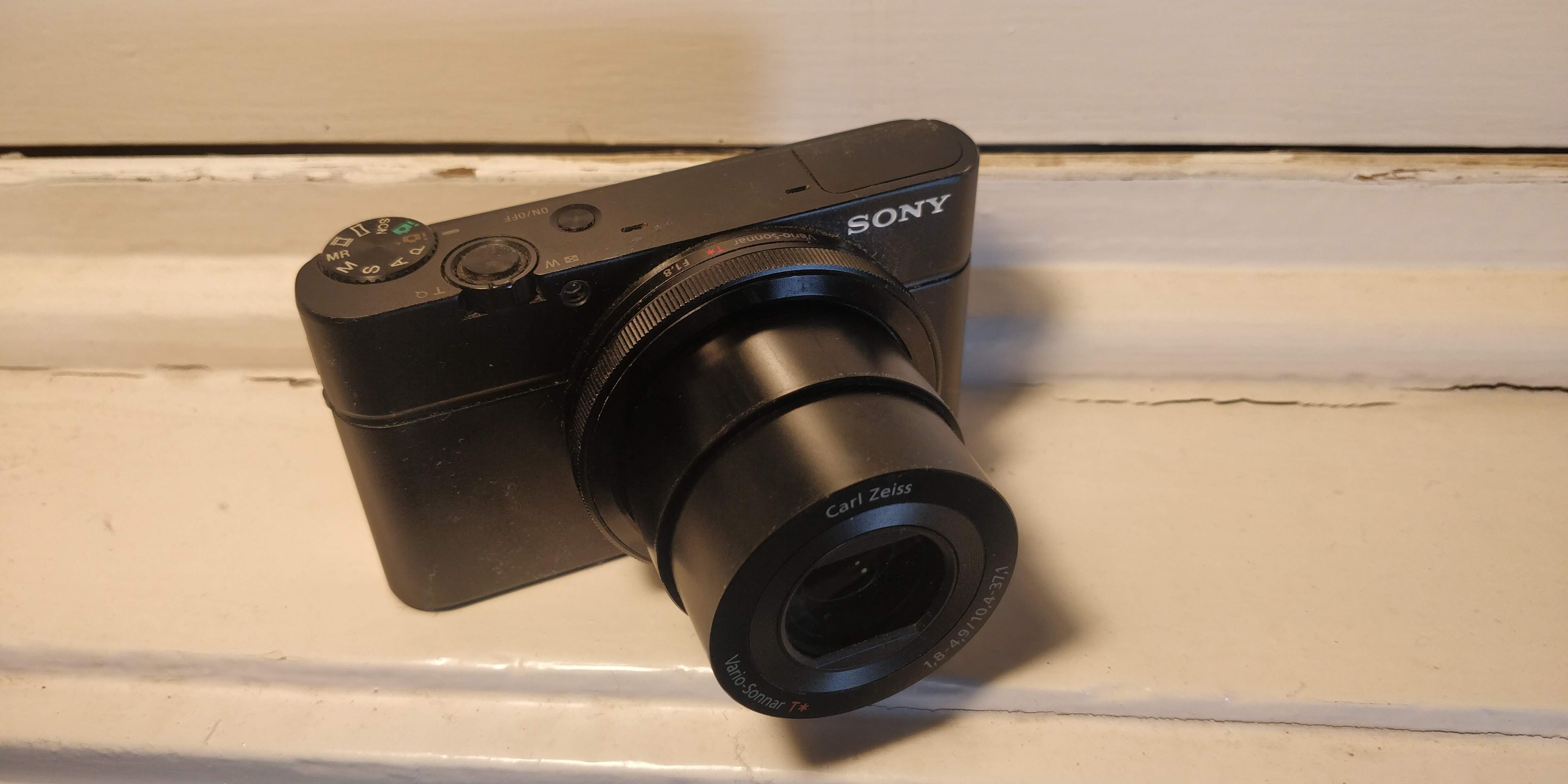 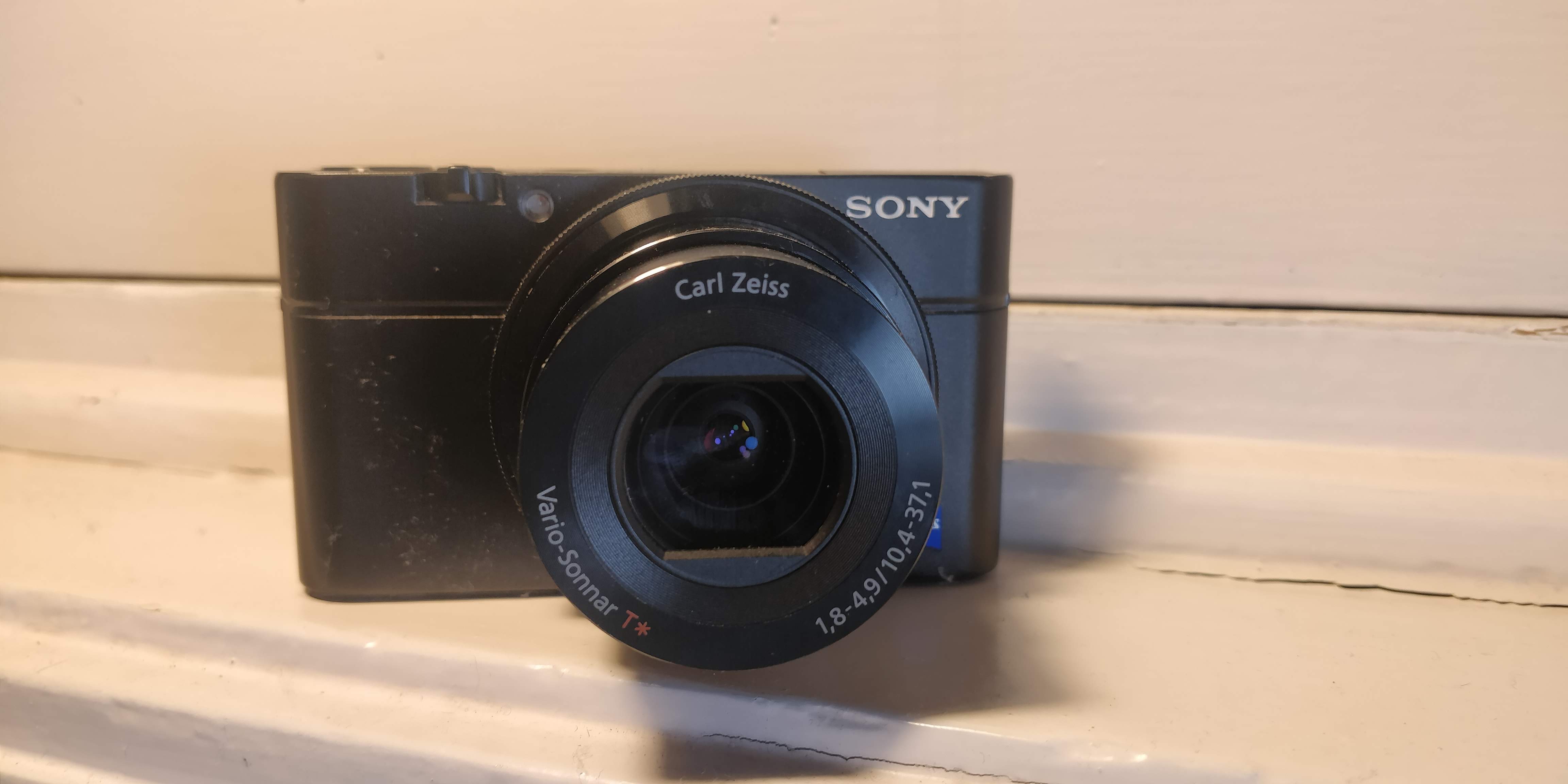 The Sony rx100 is better than Leica… for the price. I guess that’s not so special, probably most camera’s are better than Leica for the price. You could argue that Leica gear, if treated well, will hold it’s value longer and last you longer, and is therefore a better deal…. but that’s not what this post is about.  So why do I want to write about the rx100 then? Well because I think it’s one of the greatest camera’s ever made.

The main reason I love this camera is because it's cheap. I paid a little over 100 EUR for mine including shipping, because Sony makes a new rx100 basically every year. As a result this 8-year-old original rx100 is a real bargain. You might wonder why I would want to use this camera when I also have an M10, and thats a good point. Well, I bought this camera so it could get stolen. Or at least, so it could get stolen and it would be acceptable.

Redeemed - one of my favourite pictures ever, I can't help but smile every time I see it, Rio

Gardening with a view, Rio

As much as I’d like to think otherwise, in most countries around the world I stick out like a sore thumb. Quite literally, because my Dutch genes mean that I belong to one of the tallest peoples in the world. But also because everywhere except the ‘west’, I look like a western tourist. That’s not unfair seeing as I am a western tourist, but it also means I am a prime target when it comes to theft. Most places in the world are OK, in fact most rural places are much safer than cities back home. However, there are some cities that are notorious for being dangerous, and thats where my rx100 comes in handy.

I bought my rx100 because I was going to visit some South American cities, such as Rio, La Paz, Cartagena and Bogota, and many others. Although none of these places are extremely dangerous if you avoid being an idiot, you can still get unlucky and have your stuff stolen. I actually had my stuff stolen at gunpoint in Thailand, probably one of the safest tourist destinations, so there is some precedent here. And yeah, you can get unlucky.

If theres one thing I am really not willing to loose, its my M10. Well actually its insured, so it wouldn’t be the end of the world, and sometimes you need to take risks! But in this case I was just starting a 9-month trip (although the last 8 months were cancelled by COVID-19), and if I lost my M10 at the start of my trip I would never be able to get a new one for a good price, and therefore never be able to forgive myself. Later in the trip (in the last months) I was planning to take some more risk, but not at the start. Nevertheless, it would be a real shame if I wasn’t taking any pictures in all of thee awesome cities, so the solution was the rx100!

However, I discovered that the rx100 is so much more. First of all, and best of all, it does something that my M10 cant: it fits in my pocket. When I walked around with the rx100 in my pocket it felt liberating. I could just forget it was there, and then grab it when I saw a cool picture. Also, not having my camera on display around my shoulder, does make me feel more comfortable in places like Rio. Because even when I took out my very old smartphone, people would come up to me almost frantically and tell me to put it away ASAP. They said if I didn’t it would get stolen. By the way: It’s actually very kind of (some of) the locals to look out for the tourists like that.

Second, this camera packs a punch! I was flabbergasted by how good the files were from this little camera, but I also wasn’t expecting much. I had completely underestimated this little one-inch sensor, but I now see why Sony hasn’t updated it for over 8 years (the newest models have the same sensor). Obviously it’s no full-frame: theres little to no bokeh, and although it has an equal number of pixels as my M10, the quality and detail represented by each pixel is worse. But the crazy thing is, the quality of the pictures is almost in the same league… ok not exactly, but it’s pretty close. And were talking about a price difference thats over 30x (when I bought both second-hand). And I could easily sell a large print shot with my rx100. In fact, I have!

The Zeiss optics are probably helping here. I find that the Zeiss lenses made for M camera’s have very distinctive ‘cooler’ colours, and the same seems to be true for the rx100. This lens is contrasty and extremely sharp, but I didn’t expect any less from Zeiss. You can’t really tell with B&W conversions though. What’s also noticeable are the very contrasty files that are typical of Sony sensors. There is less detail here than with Leica - less shades of grey, less depth in the files - but it does make for very punchy images.

What I also like about the rx100 is that it’s so unthreatening, because it’s not much bigger than a smartphone (but quite a bit thicker). The electronic shutter noise can be turned off, making this camera super silent due to its leaf shutter. I regularly caught myself double checking if I’d actually taken the picture, because I heard and felt nothing. I even took some close-up foto’s of a fox in Santiago, and it didn’t even flinch because the shutter was so silent. Speaking of that fox… this was a moment where I could really appreciate autofocus. This fox was so jumpy I would have probably missed the focus with my M10, but it was no problem for the rx100. Actually, this fox got in so close I wouldn’t even have been able to focus on it with my M10, due to the 0.7 m close-focus range. But then again, no one ever said that Leica M camera’s are good for wildlife photography. The buffer on this camera is also pretty impressive for its age, you can just shoot away if you want - but please don’t.

There is some bad stuff too. Being 8 years old, and having a retractable lens, this camera can also be pretty slow to start-up. I definitely wont catch any fleeting moments with this thing, because it takes it’s sweet sweet time. Also once you’ve turned it off, you cant turn it back on again for a few seconds. Sometimes when you turn it off, it even forgets to retract the lens, so it needs to go back on, and then off again. Being a Sony, it also has all sorts of extra’s and menu options which just get in the way. In the end I just want to focus on my picture, and as little as possible on the camera. However, if you set-up the camera right, you can turn off most buttons. Just set 3 buttons for the important stuff, and turn the rest off. Also the battery is pretty bad. If you keep the camera on the whole time, it will finish in about 1-2 hours.

Compared to the Leica M10

Obviously this camera doesn’t compare to the Leica M10 (I can’t believe this is becoming a comparison with the Leica M10). The rx100 is made mostly of metal, but the build quality doesn’t even come close to that of Leica. The buttons are plastic, and the ergonomics of the rx100 are off. Some buttons are quite hard to press, others are impossible not to press by accident. The layout is quite simple overall though, especially compared to other Sony camera’s, which is good. It’s also missing the dedicated shutter dial, the manual aperture & focus, the viewfinder, etc… Basically everything what makes a Leica M special.

So let’s be clear, I’m not going to replace my Leica with this. But I find that this camera deserves some recognition, so that’s what I’m doing here!

Don’t get the newer models. Starting from the rx100iii they added a viewfinder, but at the cost of the very best feature of this camera… they made the rx100’s too thick to fit comfortably in your pocket. Thats why as far as I’m concerned, all rx100’s after v2 are not worth anyones time. It’s too big of a sacrifice. Also the original rx100 costs less, uses the same sensor (i.e. has the same image quality), has the same build quality, and has a faster f/1.8 lens than the newest rx100. The newer models might be faster to turn on, but if it doesn’t fit in my pocket (comfortably) then count me out - not to mention all of the other sacrifices.

1. Pocketable - although not quite as comfortable as a smartphone

5. Super cheap - wont come much cheaper than this!

6. Simple layout - not too many frills (for a Sony camera) probably as a consequence of it's size

2. Questionable ergonomics - but these have been sacrificed for size, so it’s ok

4. Way too many menu options that just get in the way

Moral of the story: it just works

In the end, the rx100 just works. Once you’ve set all of the buttons right (by making most of them do nothing), the rx100 gets out of your way and it becomes a veritable picture taking machine.

OK, so it doesn’t really compare to the M10. But for those moments where I don’t want - or dare - to bring my M10, this camera is perfect. To have put such a powerful sensor in such a tiny body is incredible. This camera gives you almost pro-level quality, but packages it in a fun & cheap (if you buy it used) little body. If you cant get Leica, please get this. Sony & Zeiss have created something beautiful here, and it deserves some praise.

This camera completely blindsided me, and for a (very) brief moment even made me question why I was paying so much for Leica stuff. It’s that good! But don’t just take my word for it, take a look at these pictures. Or even better, go pick one up yourself, it wont cost you much!